The purpose of this article is to define what a pergola is, what it is used for, and to distinguish it from some of its architectural garden-dwelling cohorts, including arbors and gazebos.

To kick things off, here is a picture of a pergola just to provide a visual reference.

So, the above example is what you might call a “typical” pergola.  Why?  Because it has four sturdy beams holding up the structure itself, including crossbeams with a stylish lattice across the top.

This pergola isn’t enclosed, and, as it has a more minimal structure, it almost seems to have an “unfinished” look, depending on how you look at it.

The size of your ordinary garden-variety pergola is fairly large, spacious both vertically and horizontally, and rectangular.  The space underneath, defined by the pergola, opens up many possibilities.

The lattice at the top, where the cross beams intersect, is not strictly necessary.  It can simply have cross beams going one way without the lattice, with some sort of covering, like this: 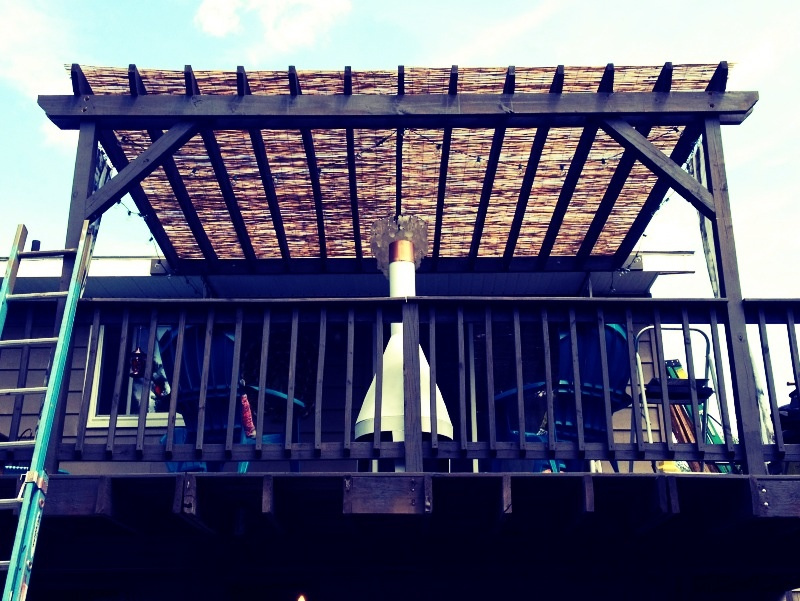 As you can see from the example above, pergolas can be elevated off the ground, so long as they have a surface to sit on.

Visually, pergolas are usually large enough to be striking when people see them, drawing their attention visually, and, aesthetically, they can come in many different designs and colours. 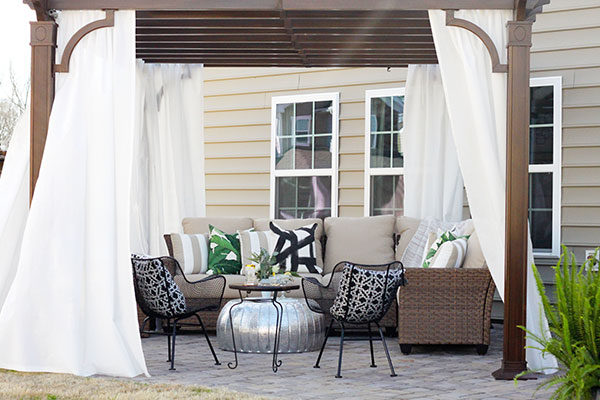 The purpose of a pergola is just to provide an area for you and your family / friends to mingle in.  You can choose whether you want to use it as an area to entertain, or if you want it to be a more private area to relax in, which can act as a respite from the world.

Curtains can help with this, as shown above.  Once you have the pergola set up, that’s when the real creativity comes in.

Your average 10 x 18 foot pergola creates a space that would be large enough to fit, say, a hot tub in, or some sectional furniture, creating a space in which you can luxuriate. 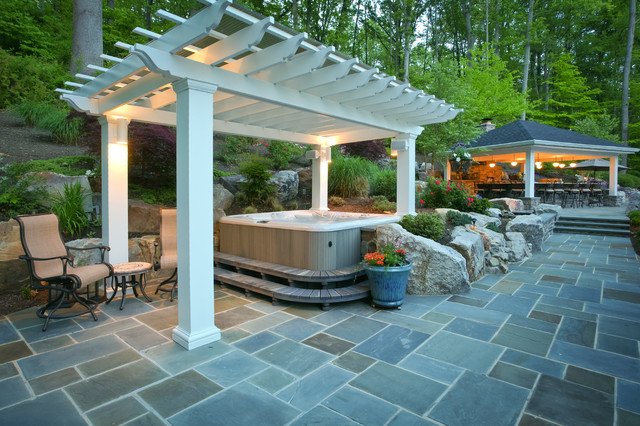 Of course, you won’t get a lot of shelter under a pergola from the elements, like wind, sun, or rain, but you may not want that, as the idea is for it to be open, and allow for these elements to be part of your experience.

The word pergola comes from the Latin word “pergula”, which means “projecting eave”.

Now, we all know eaves as being that part of a roof on our homes and sheds which generally projects out from the wall it sits atop, to create either a slight or pronounced overhang, allowing for rain to fall over the edge, away from the vertical walls of the structure in question. 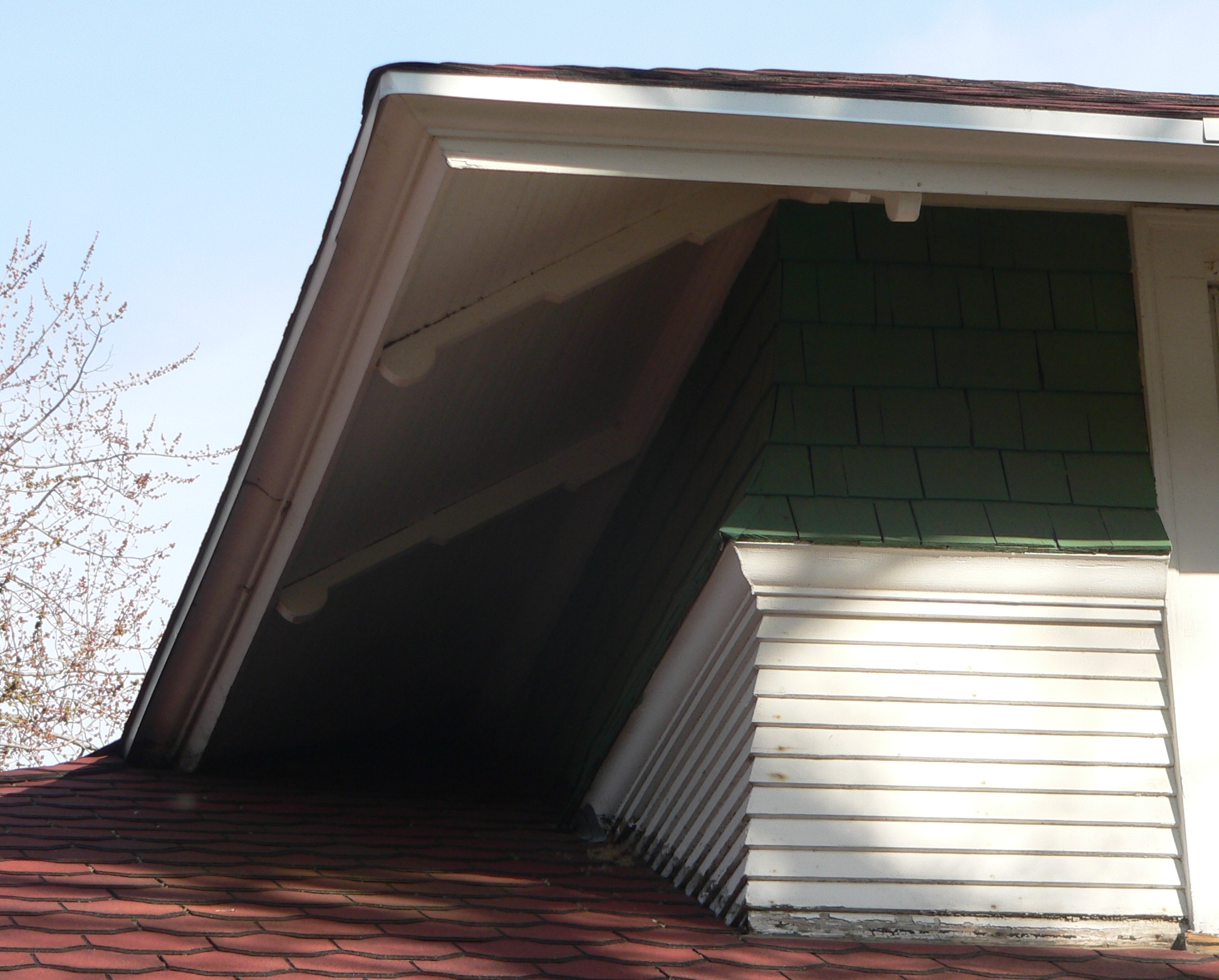 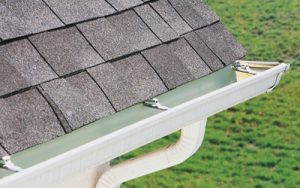 Eaves also create a little bit of extra shade for any given home or structure, and can create an alcove area for animals, birds, and insects.  Some people are ok with this.  Others are not. 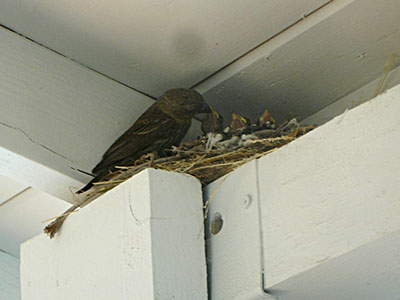 Now, it is interesting that a pergola should be based on the idea of an eave, because as a structure on it’s own, it doesn’t really have any eaves to speak of.

When we look at a typical pergola, it has a minimum of four support beams (often there are more), which can be made from materials like wood or stone, and then cross beams overtop to form a lattice, but no solid roof.

Here’s a pergola made from bamboo, to give a little bit of a south Pacific feel. 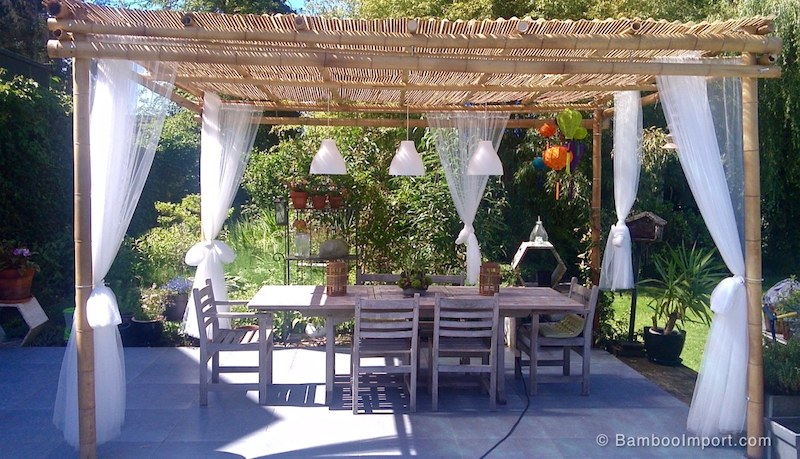 The idea, generally speaking, is that we sit under a pergola where we can relax and / or socialize, and it provides us with a designated area to do so, and yet, it need not have anything shading us from the sun or rain in terms of a solid roof.

Pergolas Vs. Gazebos and Solariums

Still, there is some protection offered by the lattice or the open roof of the pergola itself, but there is usually plenty of sun coming in.

There are generally no walls, curtains, or netting surrounding a pergola; this is usually left to gazebos, solariums, and tents, to keep us fully separated from the elements.

Here’s a picture of a typical gazebo for comparisons’ sake.  Notice that it has netting you can extend to enclose yourself, keeping you protected from bugs, sun, and whatnot. 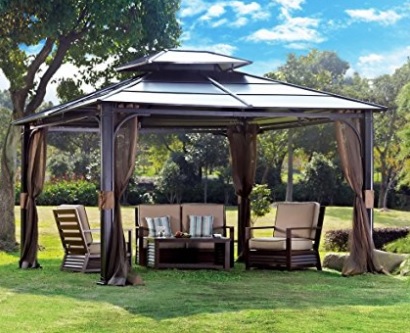 The other big difference here with a gazebo is the roof.  Gazebos always have a roof over them of some sort, whether it’s hard top or soft top, while pergolas do not.

That said both are still usually square-ish or rectangular in shape, it’s just that a gazebo has a roof and a pergola doesn’t.

Also, gazebos don’t always have solid walls.  Gazebos either have no wall between the struts, or a curtain or netting used to make a type of wall.

Some gazebos have solid walls.  These exist, except the walls are made out of glass, and these structures are known as solariums, because they allow sunlight in, allowing for heat to collect inside, due to the walls and windows.

Here’s a picture of a solarium, for reference. 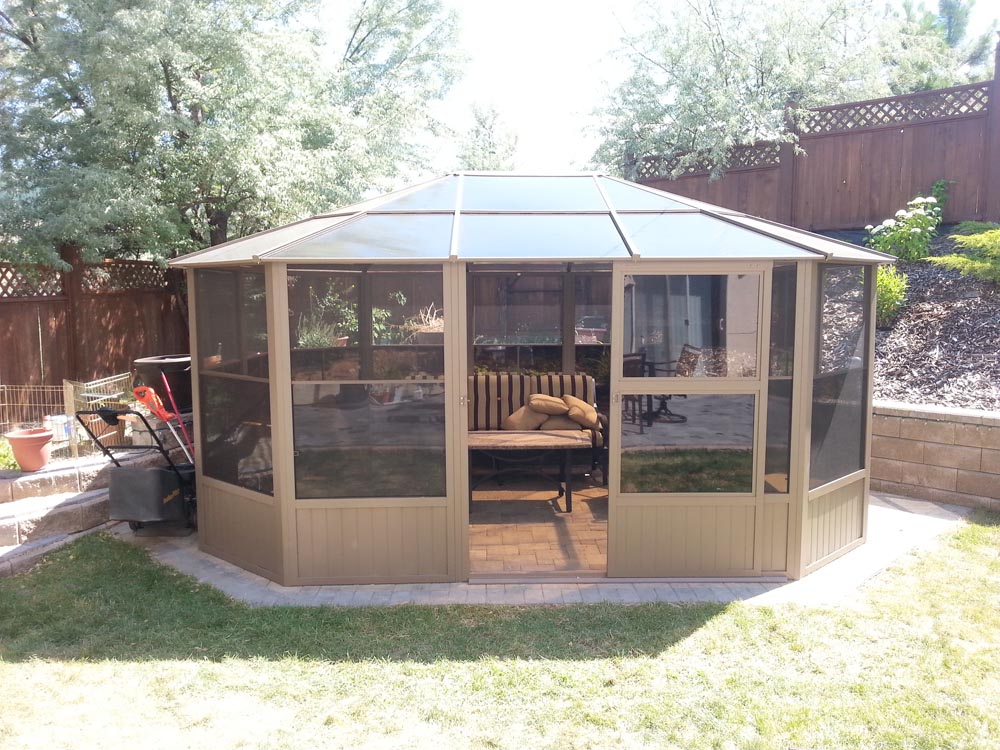 A solarium is similar to a gazebo, in that it has a roof, but it also has the solid walls, kind of like a little cottage, or enclosed room, but often with a distinct octagonal shape that gazebos do not usually have, and which pergolas never have.

Anyway, let’s back to pergolas before we get too far off topic, as your average backyard can and often is filled with many structures, and we don’t want to talk about *all* of them right now.

Consider this.  Pergolas, while they are often freestanding, can also be attached to your home, and hence not freestanding in these particular cases. 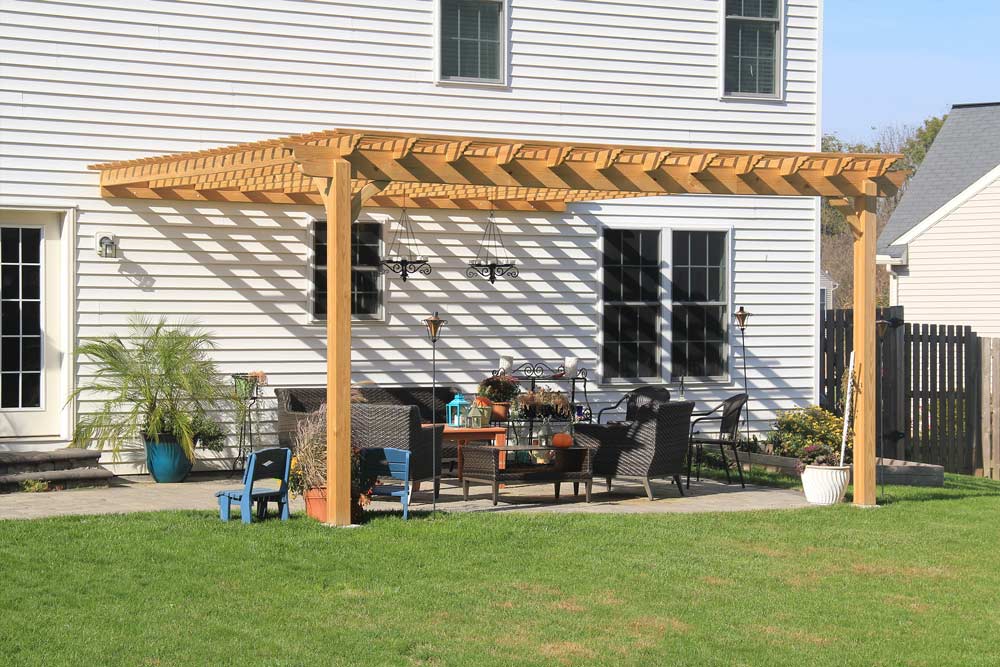 This is where the term “eave” *would* seem more applicable for pergolas, in that pergolas which extend off of a house seem to act as eaves unto themselves… except, ironically, that pergolas do not provide a solid covering like most eaves do.

That is, unless you add some covering in the form of plants or vines that is thick and protective. 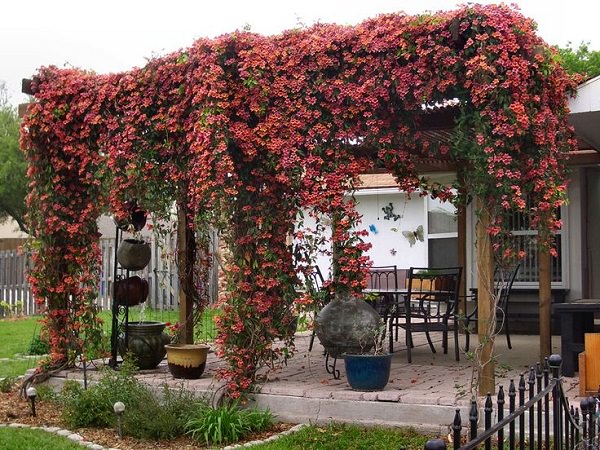 Now that you think you might have a handle on pergolas, behold!  They can also act as a covering for a walkway, following a straight path that people may walk under, several abreast, like this one below… 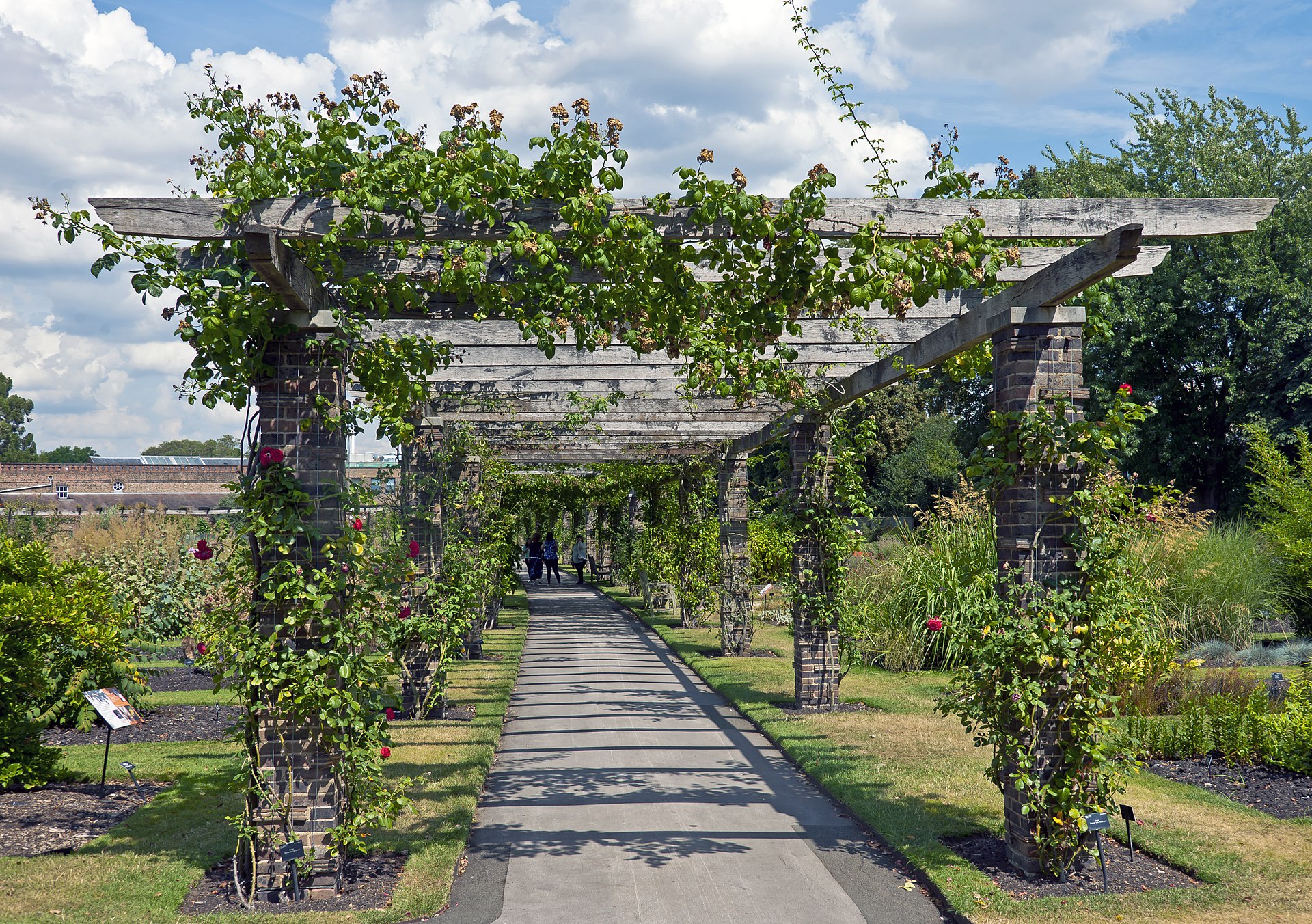 As you can see, something like this would not look out of place at a vineyard or some type of large garden.  In the above example, there is a flowering bush which winds it’s way up the brick pillars holding up the pergola and, in serpentine fashion, snakes around the crossbeams.  It looks lovely and very rustic due to the type of brick and wood they’ve used to make it.

Now, below we have something similar, but not at all the same as the other long pergola we just saw.  This one is long, but has a completely different look, and function. 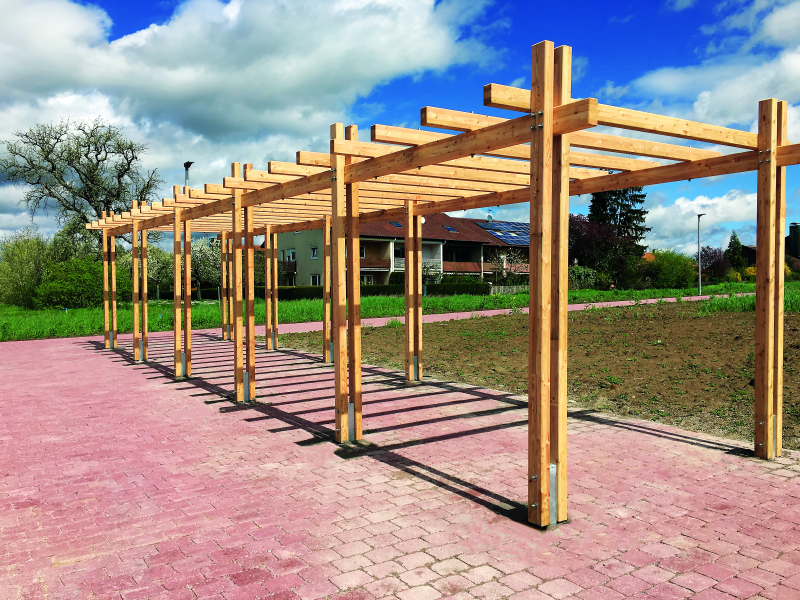 What might the function of this one be?  It doesn’t follow a walkway, or have any covering at all, or really any sort of design flair to make it more elegant.

There is nothing underneath it, nor does it look like a cozy getaway destination in your backyard.  In fact, it seems to just be hanging out on its own, near a garden, but not in it, and with no particular purpose other than to be there.

Still, it is clearly a pergola, with its purpose a relative mystery.

Yes, it would seem that the more you know about pergolas, the more you should be prepared to be surprised, as there are practically unlimited types that you’ll see out there once you start to be able to identify them.

Why, we haven’t even mentioned arched pergolas yet.  Here’s one of those…oh, and it has it’s own wall, thereby defying one of the “laws” of pergolas – no solid walls! 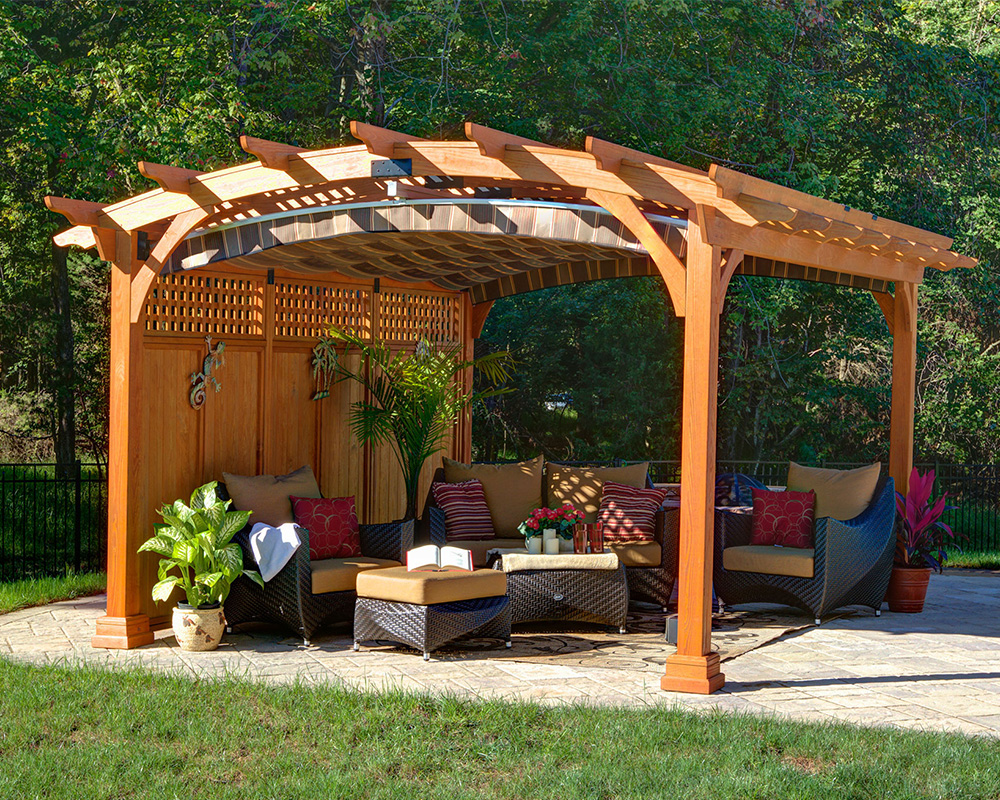 By now, you can probably see what the difference is between a pergola and a gazebo.  But what about an arbor?  Arbors look similar to pergolas in several ways, but they serve different purposes.

In fact, some even use the term arbor and pergola interchangeably.  The gall of these people!

Here is a picture of your average arbor. 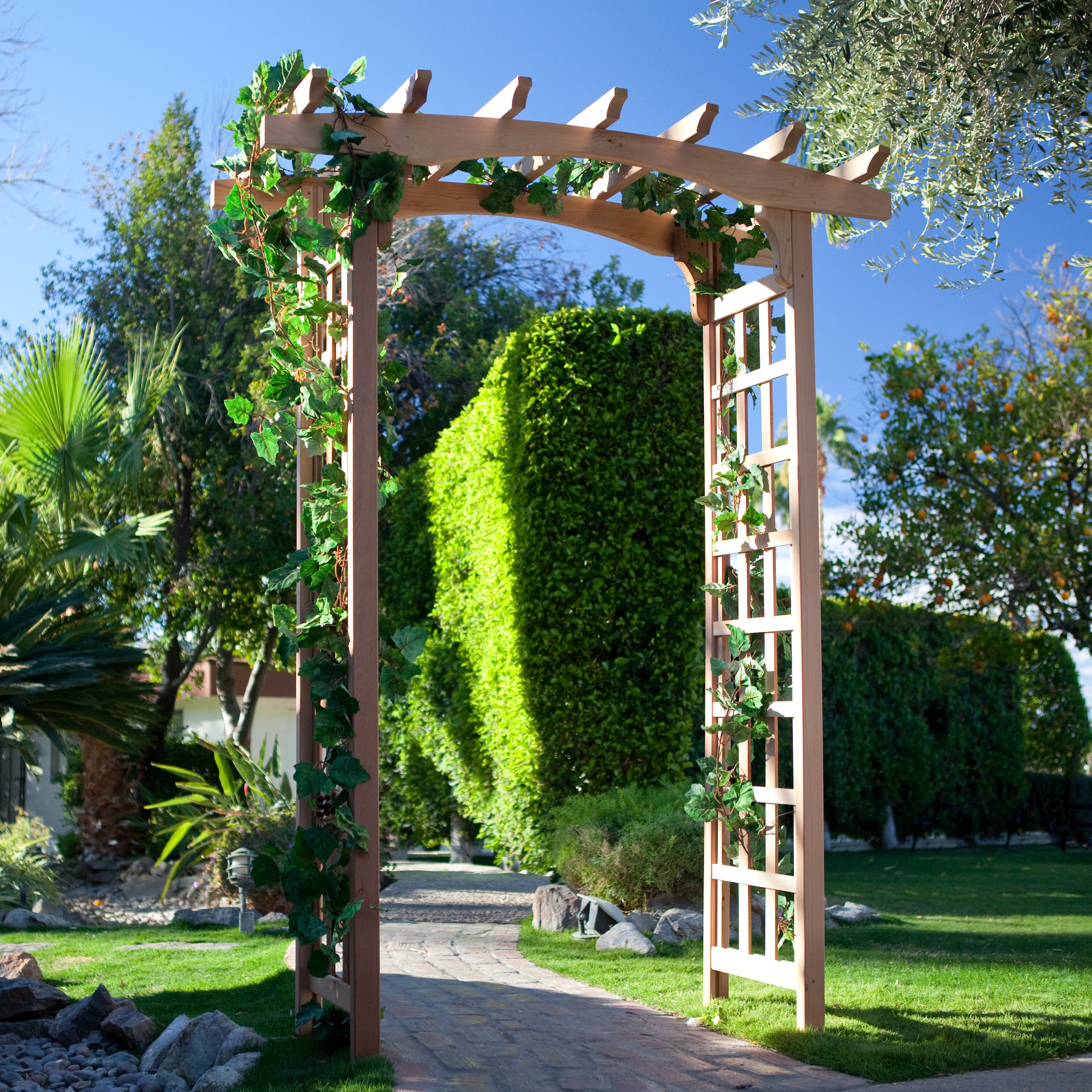 The etymology of the word arbor is interesting.  In french, “arbre” means tree, and “erbier” means “grass” or “herb”.  In middle english, arbour means “lawn” or “flower bed”.

And so, in terms of the history of the word, arbor has a very different meaning from “pergola”, which means “outcropping eave”.

In other words, pergola harkens to something protective, and arbor suggests vegetation, which is logical, as arbors are almost synonymous with gardens.

Physically, like a pergola, arbors are not enclosed, and they have at least four struts holding them up, and then crossbeams over top.  They come in a variety of styles, and are made from a variety of materials, but usually they are made from wood.

However, unlike pergolas, you aren’t encouraged to spend a lot of time under an arbor.  It is meant to function almost like a doorway, or entrance / exit to or or from one part of your yard to another.  Often it leads to or from a garden. 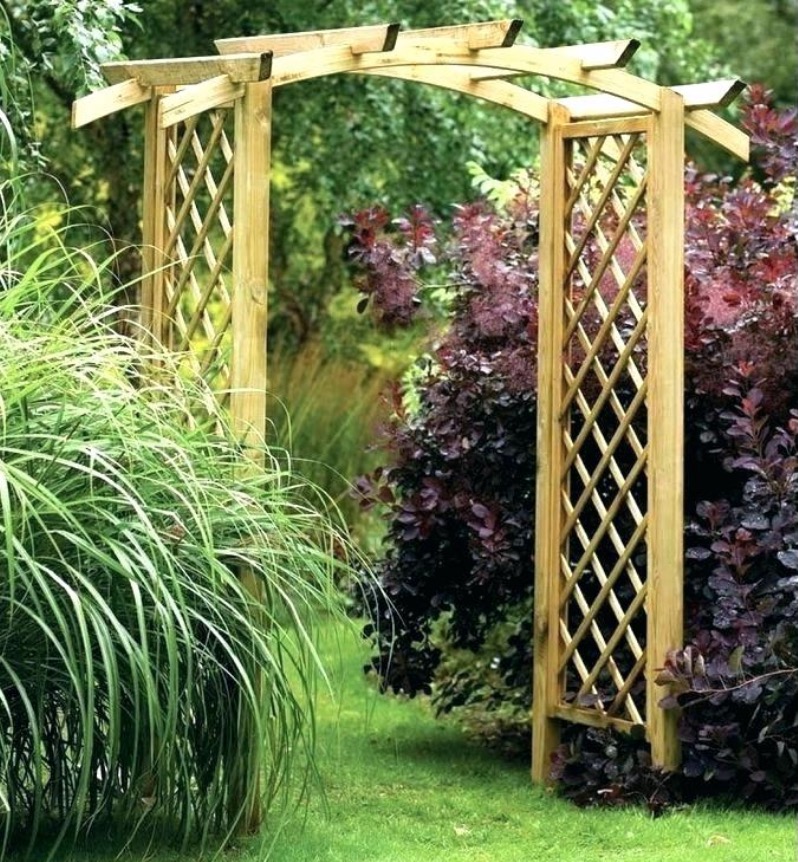 Still, arbors visually resemble pergolas more than gazebos do, as they are usually rectangular, open on all sides, and most often made out of wood.

But of course, there’s always exceptions.

Don’t look now, but here is a pergola which has circular pillars made from cement.  It is free-standing, but still nestled up beside a house.  It is also overflowing with vegetation.  Still, you would not confuse this structure with an arbor. 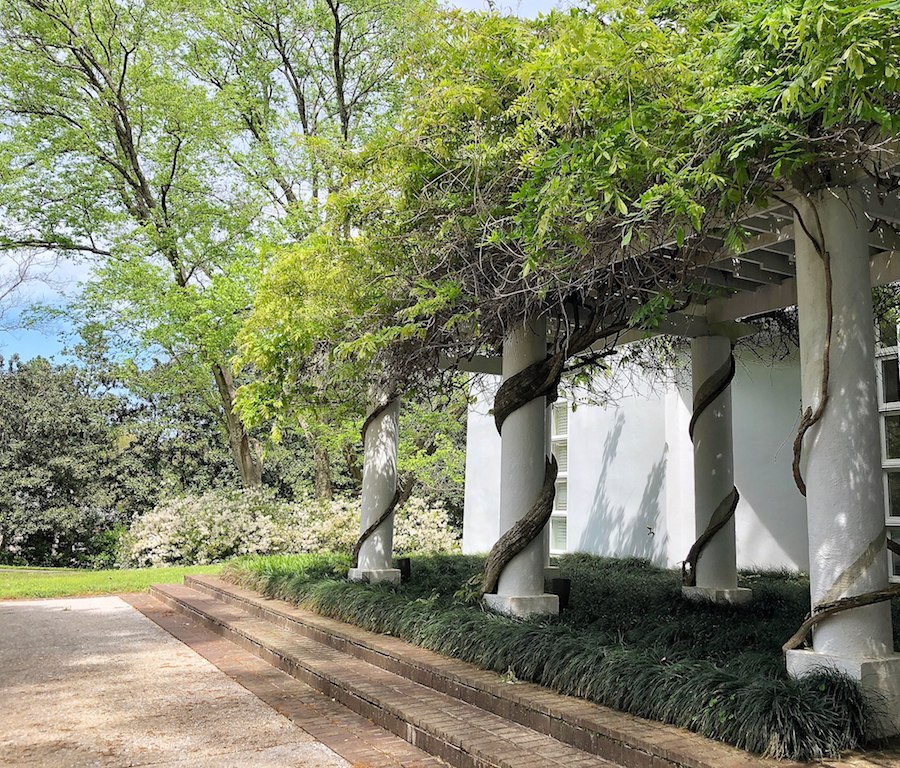 Speaking of defying expectations, here is an arbor made out of aluminum for comparisons’ sake.  It is, as you can see, not made from wood, and, also, rounded at the top, defying convention. 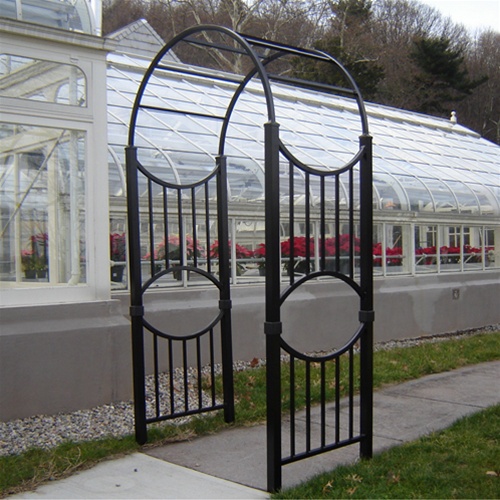 While arbors can be kept free of vegetation, they can also be a place to feature plants and flowers, just like certain pergolas.  Take this arbor, for example. 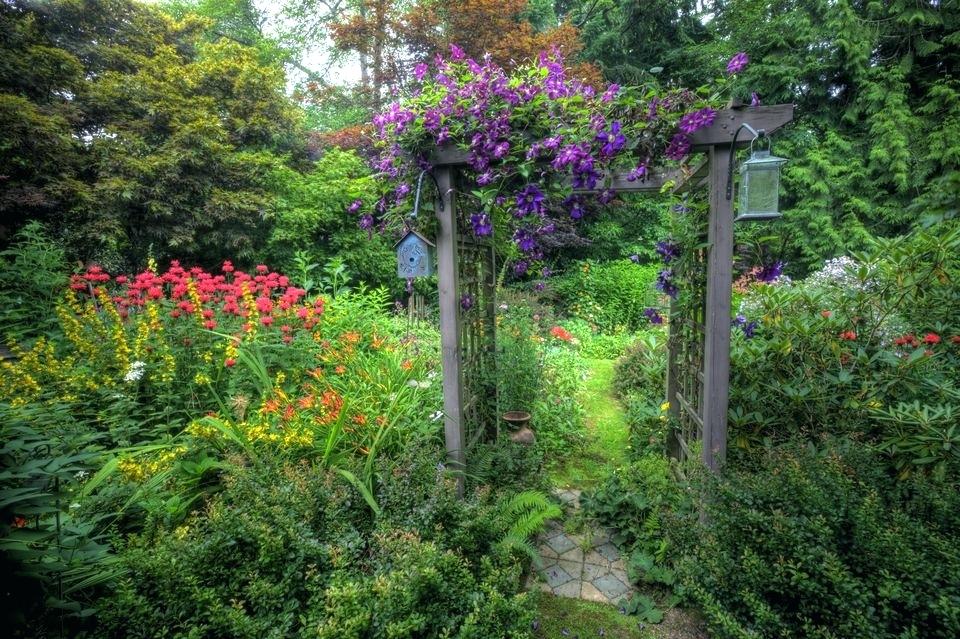 After looking at a few different arbors, you can see how arbors are not the same as pergolas.

Pergolas create a sitting area, arbors do not, so their function is different.  Pergolas are much larger than arbors.  Height-wise, they are comparable.  Length-wise, they are very different.  They both be highly ornate, or very simple, design-wise.

We hope that this article provides some useful information on pergolas, so that, if you didn’t before, now you know what a pergola is and what it is used for.

We’ve provided what should prove to be the guidelines of what makes a pergola a pergola, but of course, rules are meant to be broken, so prepare to be shocked and amazed the more you look into them.

All in all, if you feel like we missed anything, or got something wrong, leave us a comment, as we’d love to hear from you all on this!

2 thoughts on “What Is A Pergola and What Is It Used For?”