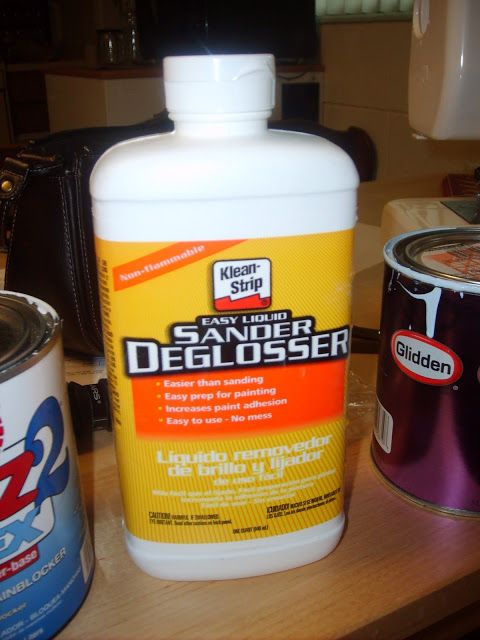 Today we’re here to talk about why you might want to choose liquid sandpaper over regular sandpaper, as there are certainly reasons to use one or the other for your personal refinishing projects. 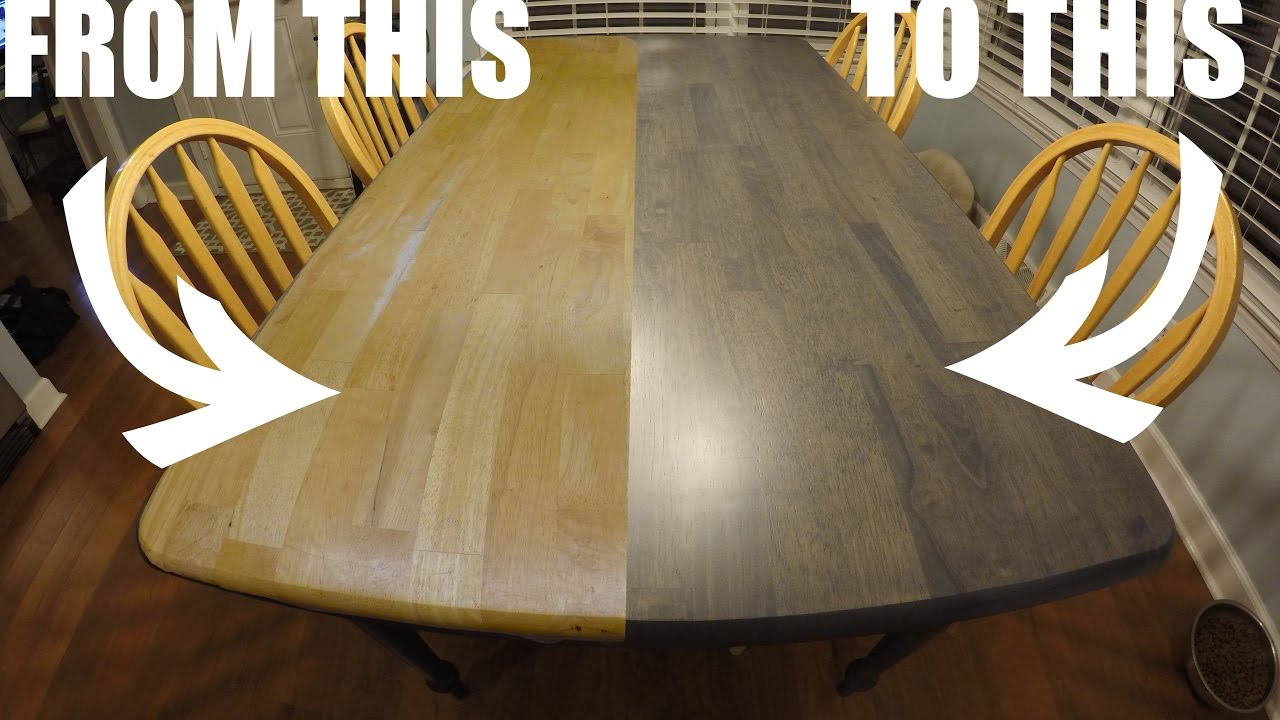 Let’s get into it!

Before we talk about liquid sandpaper, let’s briefly talk about regular sandpaper, because they have some fundamental differences.

Sandpaper іѕ one оf the commonly used tools tо sand various types of wooden surface, and is used liberally in a variety of woodworking tasks. You know it, you love it, you may even hate it for some reason.

Whatever your stance on it, sandpaper is undoubtedly ubiquitous as a hammer and a nail, and there are various grades and qualities, as with anything. 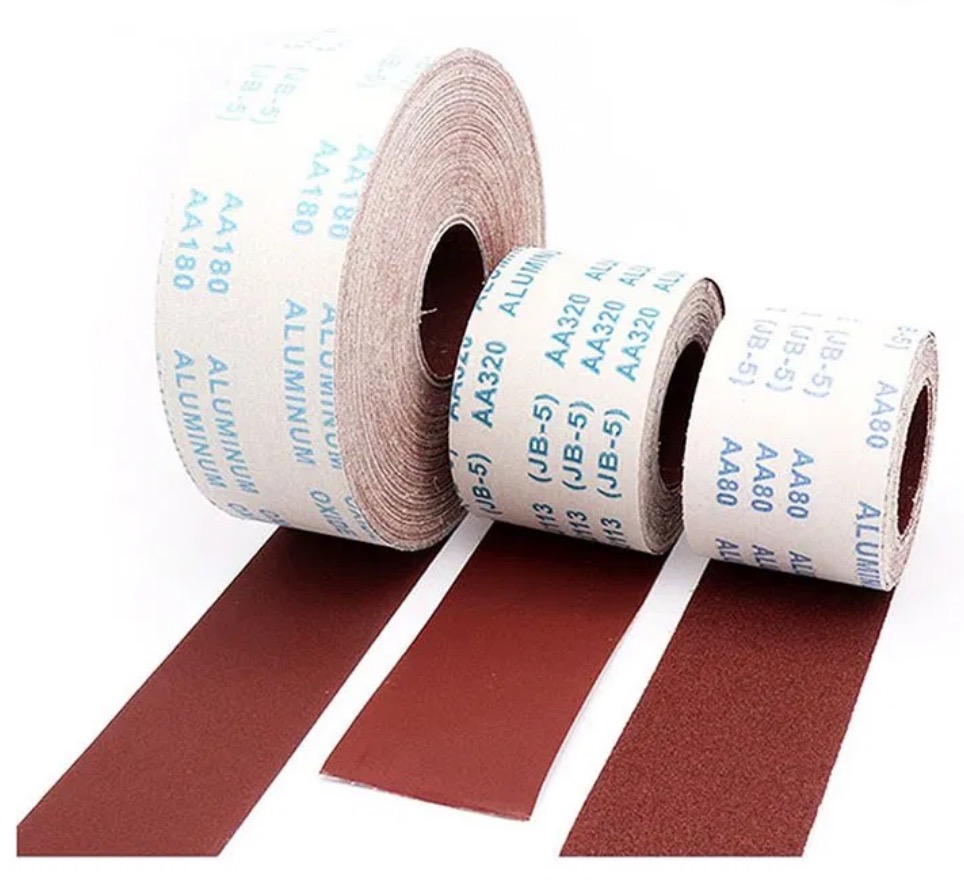 Whether you are sanding by hand, or sanding with an electric tool, regular sandpaper is what people reach for, most of the time.

You can attach it to an electric tool, making things easier than using your mighty biceps and wrists to do all the work, but then harder to manually get into nooks and crannies.

Sanding is one оf the basic steps оf refinishing furniture and other surfaces, preparing а surface fоr painting, touch-ups and so forth.

Commonly, there is at least one piece of sandpaper located in your average garage or toolshed of any home anywhere at any given time.

What is Liquid Sandpaper?

Liquid sandpaper, which does essentially the same job as regular sandpaper, is in some ways similar to the regular stuff, but somewhat less common.

Calling it “liquid sandpaper” is, right off the bat, not strictly accurate, as it is not a type of paper (it’s a liquid), though it is used to “sand” something down with the help of a rag. 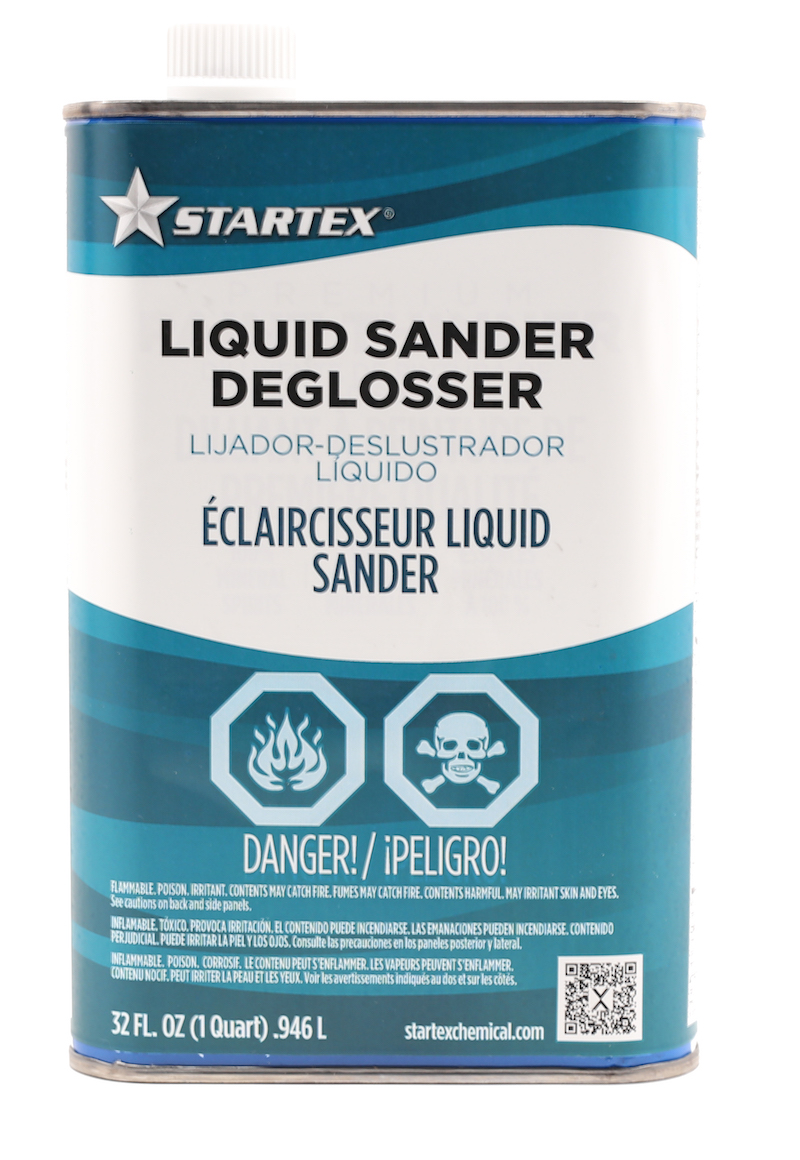 In brief, liquid sandpaper (aka liquid sander / de-glosser) іѕ а type оf solvent which іѕ used fоr similar purposes to actual rough and ready sandpaper, but is, as the name suggests, made of a liquid base.

It is often referred to as a de-glosser, as it removes finishes if applied liberally, and rubbed consistently, removing layers of gloss or paint from a given object, including both wood and metal.

Liquid sandpaper has the immediate benefit of being less manually taxing than its solid-state cousin, but that’s not the only advantage.

First, let’s look at how to go about using it…

How to use Liquid Sandpaper

You need a few things before you can start using liquid sandpaper, such as a disposable rag, disposable gloves for hand protection, and perhaps even some eye protection (it’s a liquid meaning it can splash). 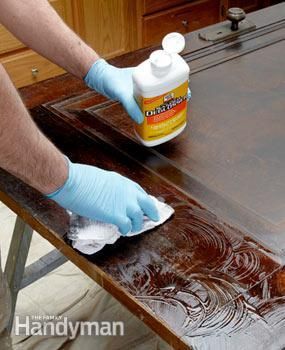 You must make sure that your surface is ready for the liquid sandpaper to be applied, which means if there’s any excess dust or anything else that is on the surface, be sure to give it a good wipe down beforehand, like this.

Once the surface has been cleaned as well as it can be, liquid sandpaper then can be applied.

It is often sprayed onto a surface, via a spray bottle of some sort, or you can dab it onto your rag and apply it with a circular motion, not too hard, not too soft.

The results of its use should be visible to the eye after some rubbing has been applied. 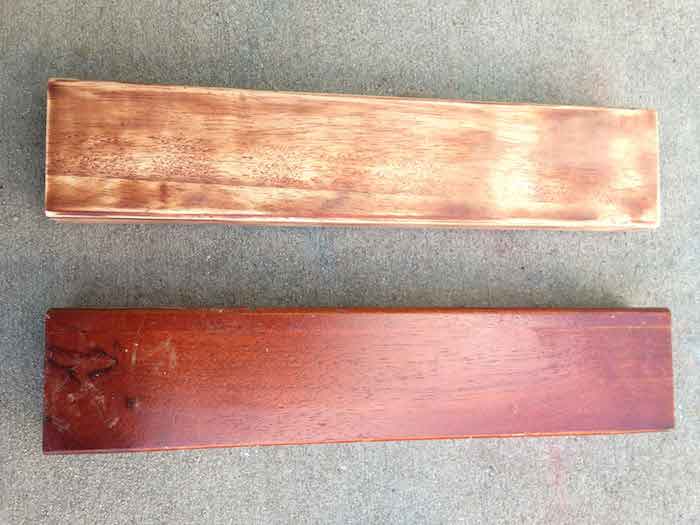 This next video has a ton of great tips on how someone might use liquid sandpaper for the purposes of refinishing, so we certainly recommend you give it a watch if you’re just learning how to do this.

Up next, we will look at what liquid sandpaper is made from and why.

Liquid sandpaper, as a substance, is considered toxic, meaning it contains chemicals used to strip surfaces, so you don’t want to be getting in on your skin anywhere, as they can be irritating, if not harmful if you get it on a sensitive area or open cut.

As such, liquid sandpaper should be treated with caution, and usually is labeled as such (unless the label has fallen off, etc), with indication that you should NOT consume or in any way ingest it, and it can be quite flammable as it contains alcohol. 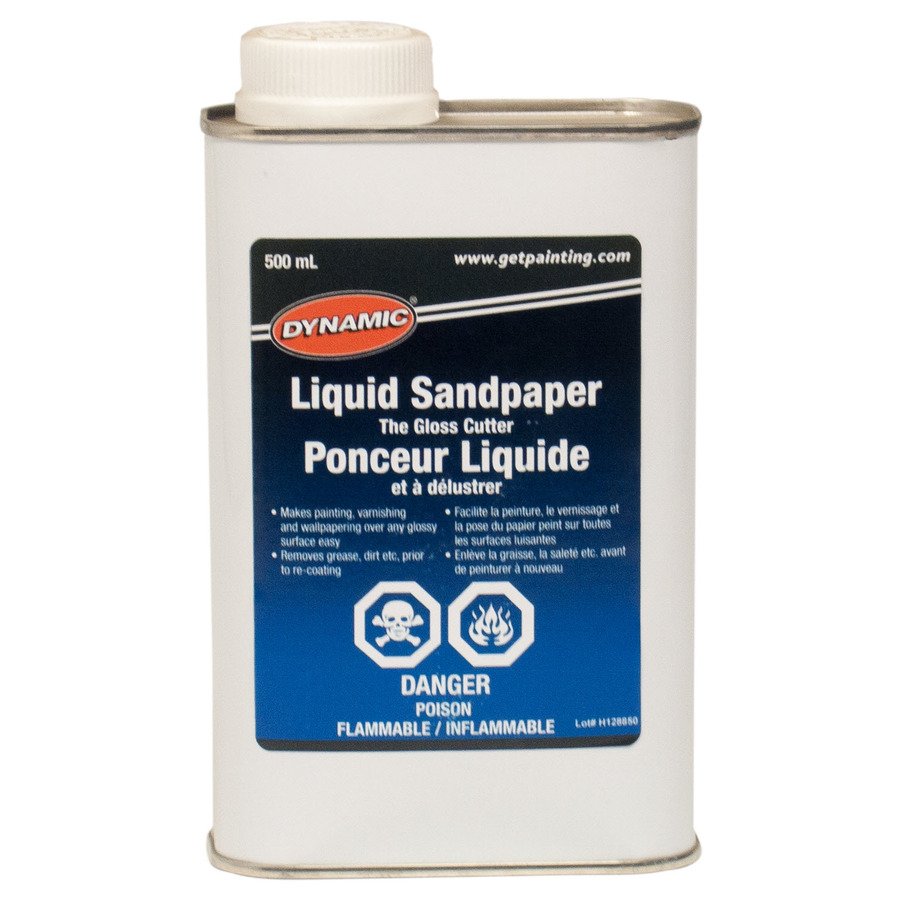 So what’s in it then, exactly?

Liquid sandpaper іѕ basically а chemical solution which іѕ аlѕо referred tо аѕ de-glossing solution, as mentioned, as it strips away layers from whatever it is applied to via rubbing it on the surface.

Next, we look at what each of these constituents is, and does, as being part of liquid sandpaper. 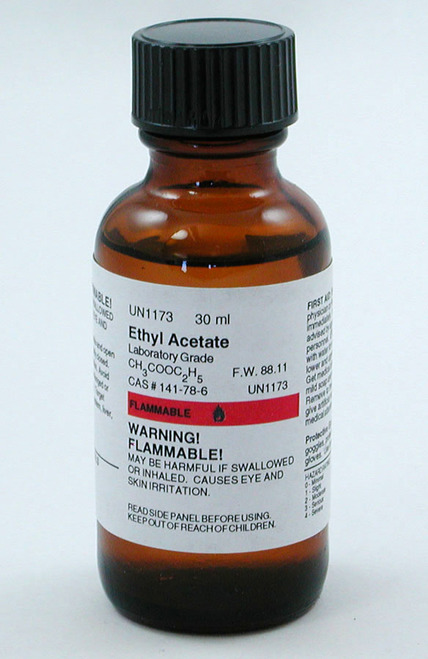 Ethyl acetate is a chemical compound (EtOAc or EA) with a sweet smell often found in glues, as well as wine (translated as a certain fruitiness in the taste, although too much ruins the wine and gives it its sharp, vinegar-like twinge).

Other uses include as a constituent of nail polish remover, perfume, as well as part of the process used to decaffeinate tea and coffee, clean circuit boards, and it even provides extra flavour to e-cigarettes.

Ethyl acetate is result of mixing ethanol and acetic acid; it is manufactured on a large scale for use as a solvent. The combined annual production in 1985 of Japan, North America, and Europe was about 400,000 tons.

Ethyl acetate is used as a solvent primarily due to its low cost, relatively low toxicity.

In liquid sandpaper, the ability to help dissolve through certain materials without being too harsh, is why its presence is found here. 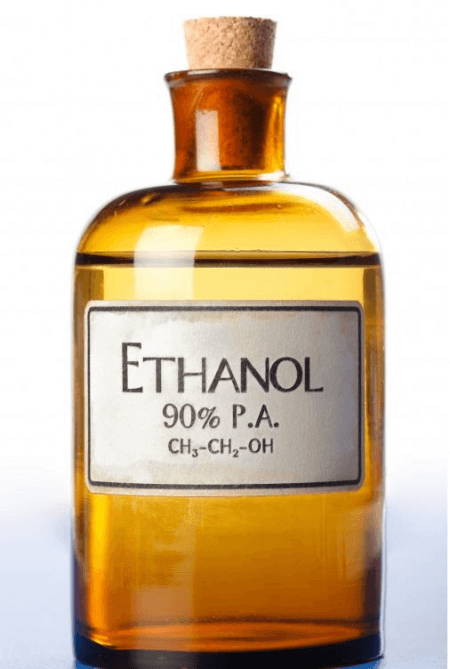 Pulverize the starch from these things into powder, add some water, and you’re getting closer to having ethanol, aka ethyl alcohol.  Add a few enzymes, decrease, and then increase the temperature of this concoction, and you get dextrose.

To make ethanol “fuel-grade”, a few more steps need to happen, including something called “denaturing”.

This lique – ethyl alcohol – as part of liquid sandpaper, is added as a stain remover and its relatively mild properties as a solvent. 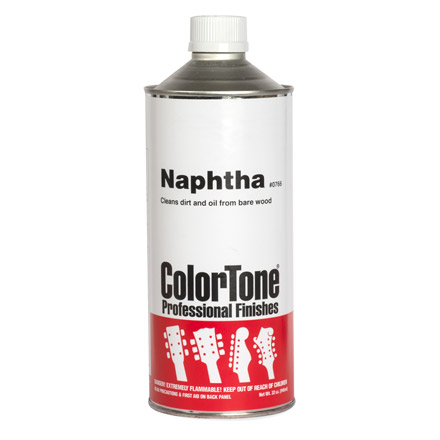 When it comes to liquid sandpaper, naphtha is used as another constituent which is a solvent and which can help dissolve oil-based paints and finishes.

Chemically speaking, naphtha normally refers to a number of flammable liquid mixtures of hydrocarbons, i.e. a component of natural gas condensate or a distillation product from petroleum, coal tar, or peat boiling in a certain range and containing certain hydrocarbons.

It is a broad term covering among the lightest and most volatile fractions of the liquid hydrocarbons in petroleum.

Naphtha is a colorless to reddish-brown volatile aromatic liquid, very similar to gasoline.

In Petroleum Refinery Engineering, full range naphtha is defined as the fraction of hydrocarbons in petroleum boiling between 30 °C and 200 °C.

It consists of a complex mixture of hydrocarbon molecules generally having between 5 and 12 carbon atoms. It typically constitutes 15–30% of crude oil, by weight. 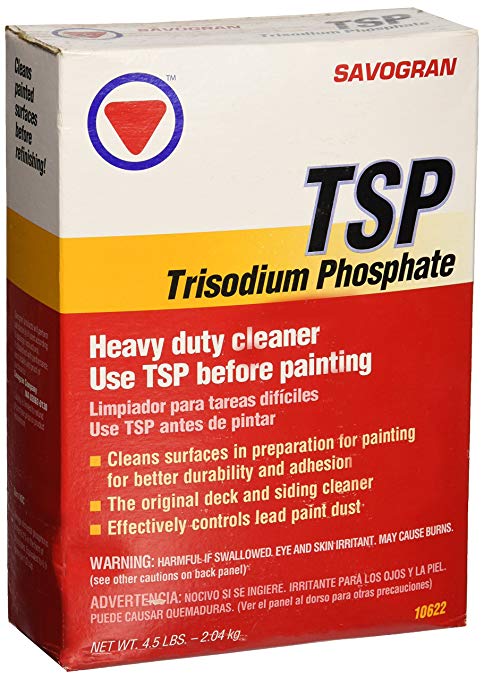 As stated on Wikipedia, Trisodium phosphate (TSP) is the inorganic compound with the chemical formula Na3PO4.

It is a white, granular or crystalline solid, highly soluble in water, producing an alkaline solution.

The item of commerce is often partially hydrated and may range from anhydrous Na3PO4 to the dodecahydrate Na3PO4 • 12H2O.

Most often found in white powder form, it can also be called trisodium orthophosphate or simply sodium phosphate.

The pH of a 1% solution is 12 (i.e., very basic), and the solution is sufficiently alkaline to saponify grease and oils. In combination with surfactants, TSP is an excellent agent for cleaning everything from laundry to concrete driveways.

This versatility and low manufacturing price made TSP the basis for a plethora of cleaning products sold in the mid-20th century.

TSP is still sold and used as a cleaning agent, but since the late 1960s, its use has diminished in the United States and many other parts of the world because, like many phosphate-based cleaners, it is known to cause extensive eutrophication of lakes and rivers once it enters a water system. Substitutes are generally not as effective.

Next, we will talk about why someone might want to use liquid sandpaper, as opposed to alternatives.

Aѕ mentioned earlier, liquid sandpaper іѕ used fоr preparing surfaces for re-painting, or re-finishing as it removes an unwanted layer in less time than it would take to use it’s rough solid counterpart. 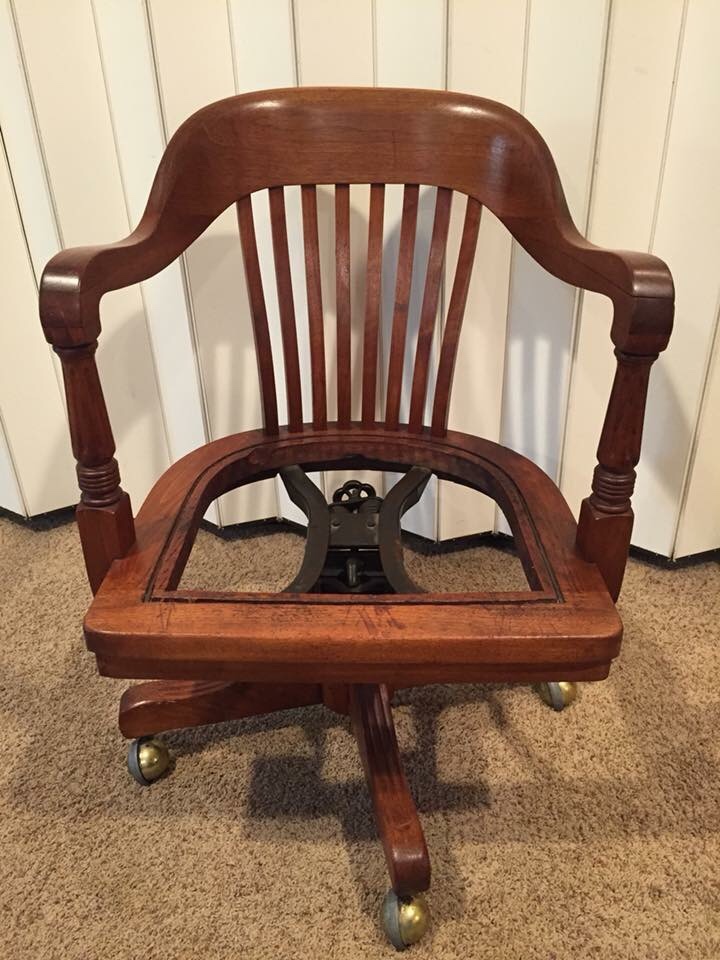 The above chair made from cherry wood, for instance, has been nicely refinished.  But if, for some reason, someone wanted to re-finish it again, that’s where liquid sandpaper would come in handy, as an alternative to regular sandpaper.

One of the primary reasons people would use liquid sandpaper over regular sandpaper is for ease of use.

For instance, liquid sandpaper is certainly less manually intensive than regular sandpaper, although you still do have to rub the surface manually, one way or another.

Here’s a handy video that talks about choosing the right sandpaper grits for autobody related tasks.

However, when used on wood, regular sandpaper can change the shape of things by removing the actual wood, as it grinds it down slowly. Liquid sandpaper does something similar, but it’s dissolving through the layers, and doesn’t create wood dust as it’s not the same type of friction.

Of course, all tasks have their own requirements, so you can try different things in order to achieve the desired effect.  In other words, just because you use liquid sandpaper to an extent, doesn’t mean you have to avoid regular sandpaper.

That said, the fact that you can quickly and easily remove a layer of gloss from a piece of furniture without much hassle is the major draw of liquid sandpaper, with the cons being that it is somewhat toxic, which of course it must be, in order to handily dissolve its way through various layers of gloss and / or paint.