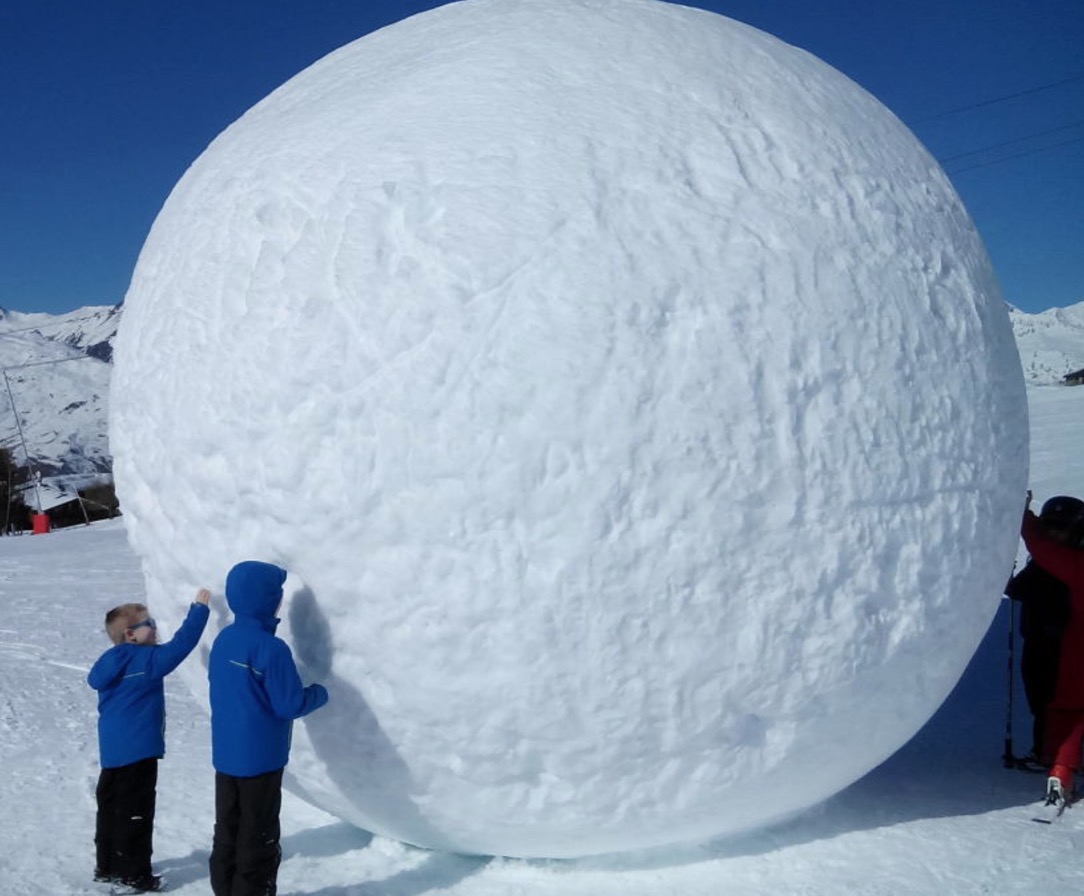 Building snowpeople and having snowball fights are all essential, traditional parts of the winter season, but this year we are taking it even further. While the snowball effect may refer to something spiralling out of control, we are here to teach you the art of snowball sorcery so that you can build the most gigantic snowball ever. 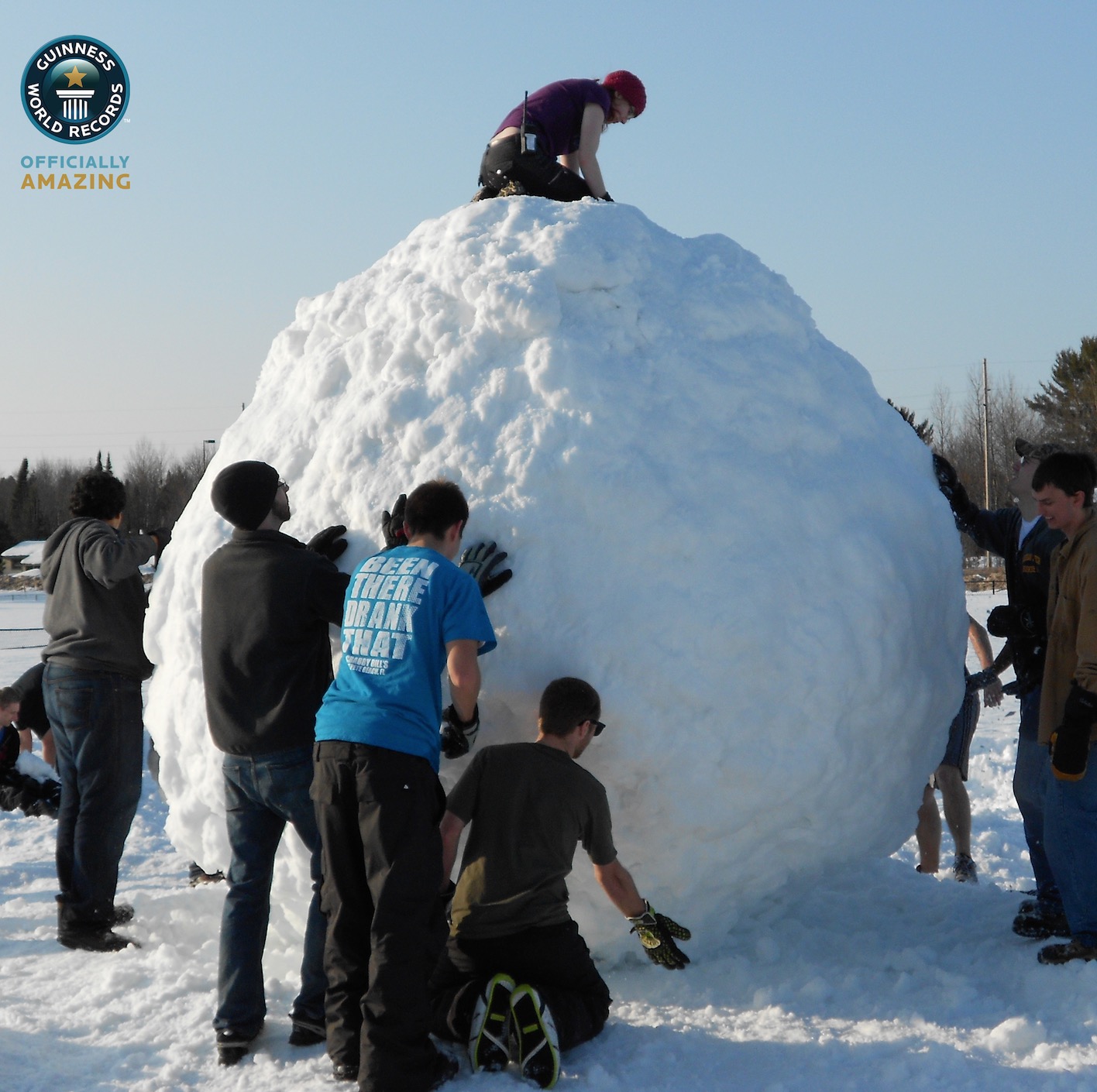 In fact, my good peeps, we should let you know that while you will need all your strength for this task, gentle control is also just as essential to building prime humungoid snowballs.

We know you want fame and glory like the kids from Michigan Tech, who currently hold the Guinness World Record, but remember that this kind of thing takes group effort.

Scope out some eager kids who won’t waste your time by throwing snow at each other, but will share a common goal in reaching Level One Snow Sorcerer. Choose some nice, helpful kids that live near you. Kids who play well with others and understand the beauty of a collective goal. Maybe you have your own kids. Bring them, too, and a camera. This will be a memorable winter activity for them, and may even set the bar for winters to come. 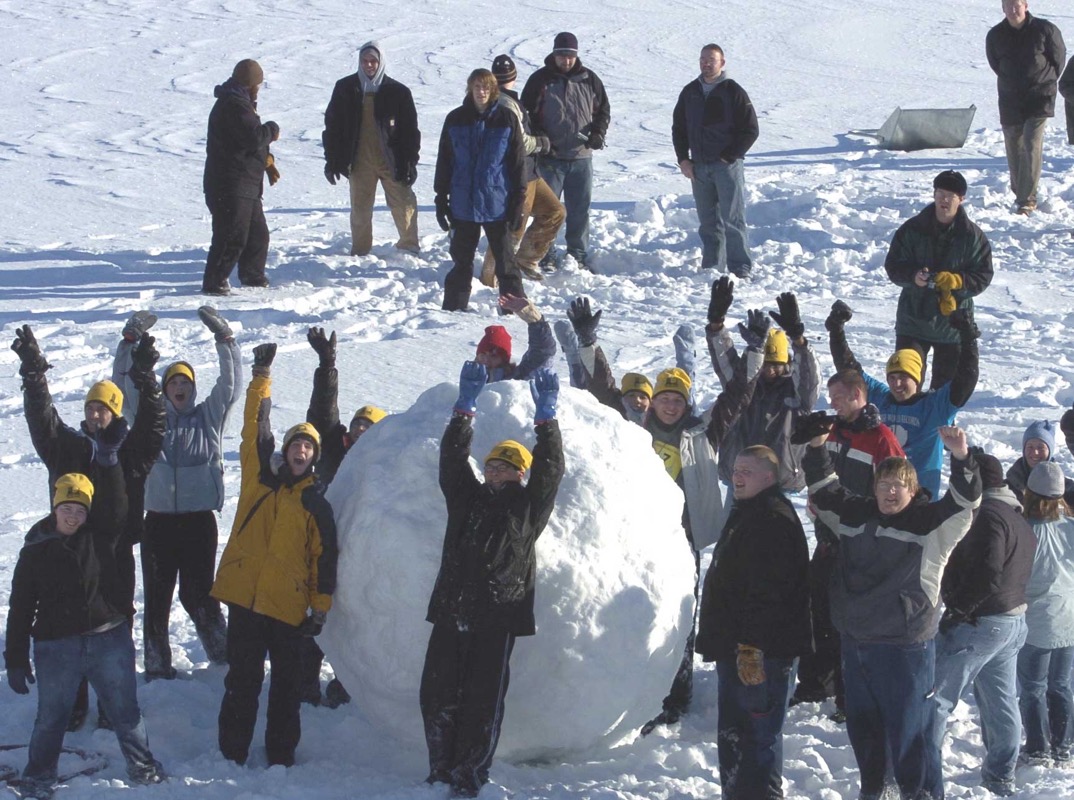 Locate the largest, flattest piece of land around. All that surface area will be condensed into one massive ball, so if you really want something gigantic, you’ll have to find that amount of snow. Ideally the land will be flat and untrampled, as you’ll be covering a lot of ground pushing this heavy thing. No hills because you don’t want the snowball to get out of control.

People have tried sending snowballs downhill but this is a cartoon myth that doesn’t work in the real world! Sending a snowball down a hill will cause it break on the way down, or cause damage to whatever is in the way: trees, cars, buildings. You have to push it entirely by yourself. This is where the kids come in handy. 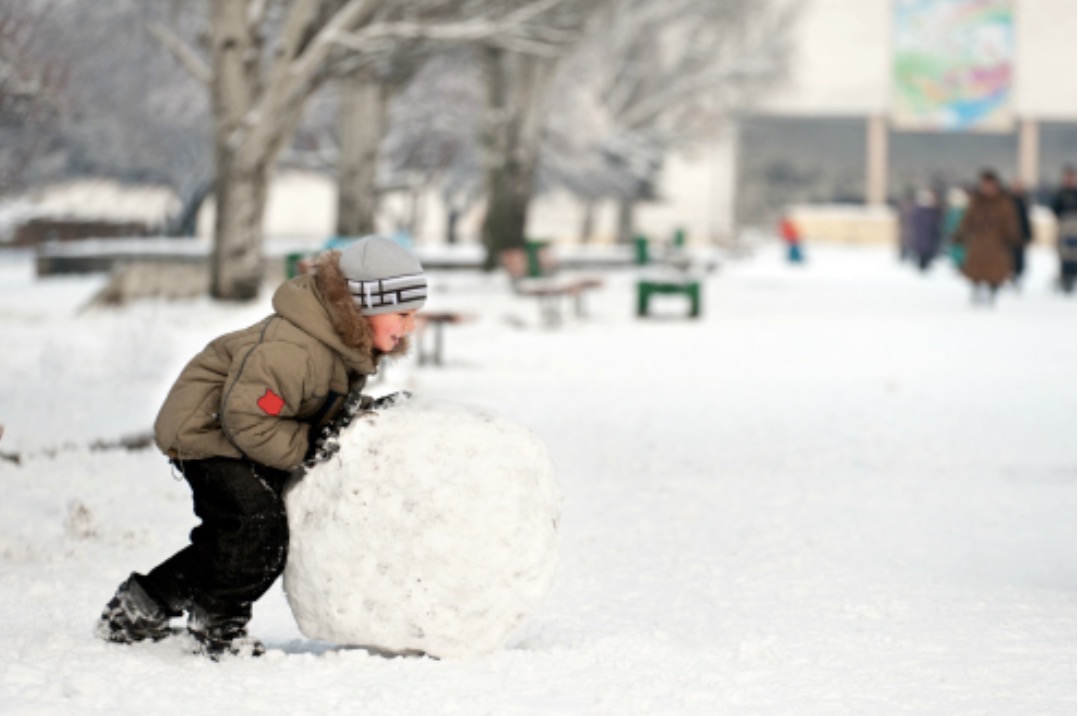 They don’t call it packing snow for nothing. Snowballs work by collecting mass as they grow, because the snow is wet and sticks to itself. You can pack it together. Wet snow is essential to rolling snowballs. You’ll find this stuff on a mild day when the snow is near or at melting point, and preferably freshly fallen. Nice and clean.

And think about this – you know the kind of snow where its so sticky that it will literally suck the grass and dirt right off the ground?  This is the kind you of snow that you want, but a fresh patch.  Remember also that if there is grass and mud or dirt underneath your snowball, such as on a football field, your snowball might be all covered in grass and dirt, but this might just be a price you’ll have to pay to get that huge snowball made.

The ideal temperature for this hovers around 0 degrees Celsius. Pick up a handful of snow and test it. If it’s too fluffy, it won’t stay packed. If it is just right, then get to your top secret location where you will execute your master plan.

Grab some snow and form it into a ball with your hands. Nice? Nice. Pack that in nice and tightly. This is the core of your giant snowball, the essential circular spine that dictates the shape of the snowball to come. Make the most perfect sphere you can, because the goal is to have snow collect evenly on all sides. This will keep it rolling easily. Smooth down the sides and make it as compact as possible. Now lay it on the ground, and start rolling. 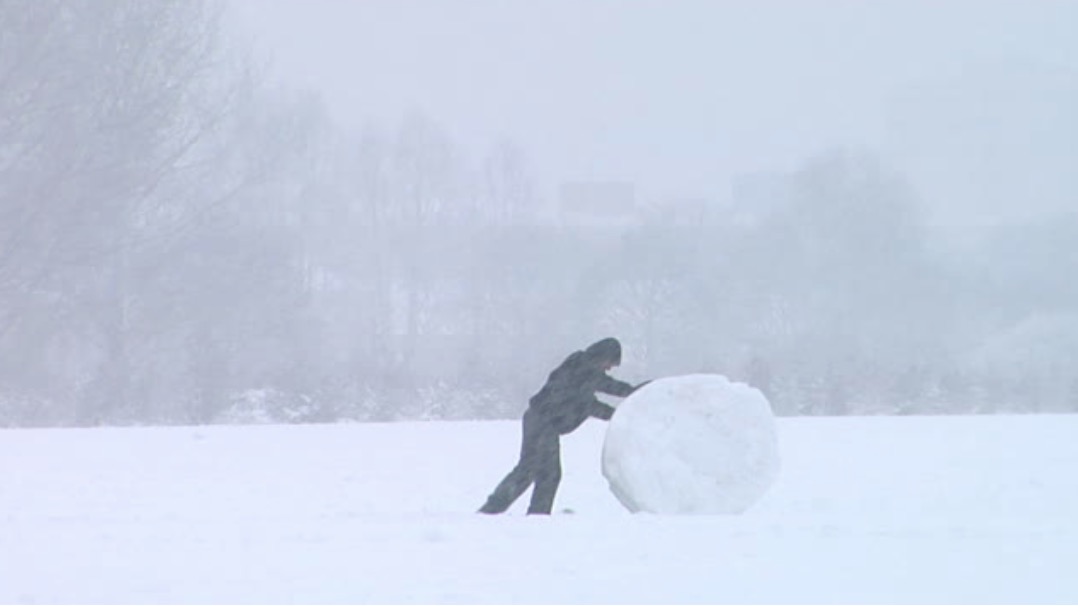 Simply push the ball along, packing and smoothing it as you go, ensuring it keeps its spherical shape.  If anyone tries to jokingly make your snowball lopsided, immediately have them removed from the scene – they clearly don’t have what it takes to go THIS HUGE.

Always remember, the beginning steps are very important, because the end result will be a magnified version of the first little ball you started with. Keeping it round and smoothed will only keep it easy to keep rolling. As you roll, you will pick up snow from the ground, and your creation will expand in size before your very eyes. It must stay compact or else the whole thing will fall apart. This step gains importance as you go, because the bigger it is, the more you have to lose. At some point, this thing is going to be too big for you to control on your own. This is where your child helpers come in handy. 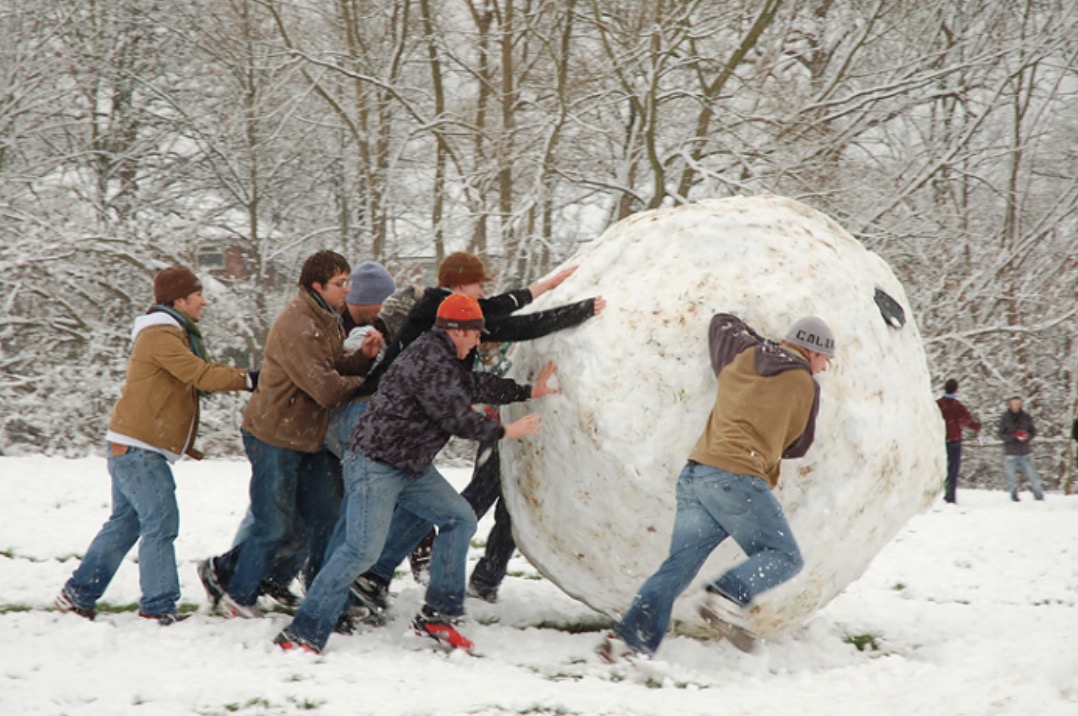 We hate to tell you this, but not everyone is going to want you to have the biggest snowball ever made by human hands.  There are people who might ruin everything.  Neighbourhood hooligans, for instance, or people who hate you and don’t want to see you succeed at anything in life.

Just think about it for a second and realize that this snowball could be the biggest thing your neighbourhood has seen in years.  It can bring you success in your town for years go come.  Hell, if you’re just some little nobody from Nowheresville, this super giant snowball might get you paid, laid, and you’ll have it made in the shade FOREVER.  But jealous people might be watching out their windows.  Watch out for them, because they’ll be coming for you, and they’ll take any opportunity to f*** your s*** up…damn!

Now that you have the most gigantic snowball ever made, take plenty of photos and reap the glory.  Unfortunately, snow melts, so this won’t last forever. (Nothing does). Immortalize the occasion with footage and pictures, and show off to all of your friends. If you didn’t make this snowball in your own yard, maybe you’d like to carry it home on a trailer and set it up in the front yard for all the world to see.

Not only are you realizing your dreams of setting the world record for Biggest Snowball Ever rolled, but you (and your helpers) are getting fresh air, exercise, and enjoying each other’s company. We guarantee this will bring a lot of laughs and smiles, and happy memories for years to come.  If you’re an adult, let’s be real –  you’ll have your choice of the hottest people who were maybe completely out of your league before.  People will notice – believe that!  If its kids that made the snowball, make sure you reward everyone with hot chocolate and cookies. 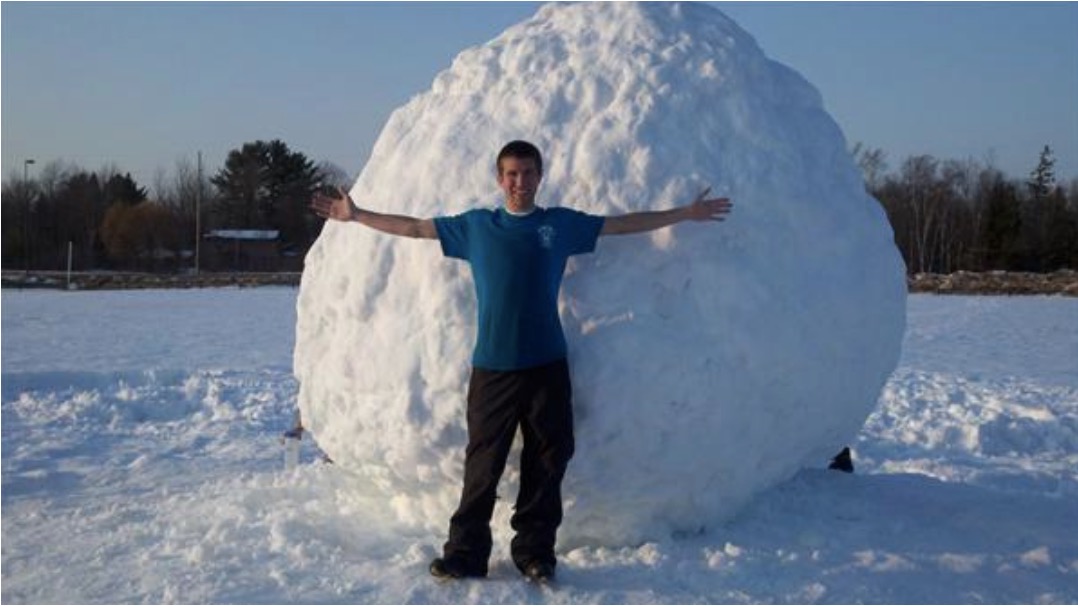