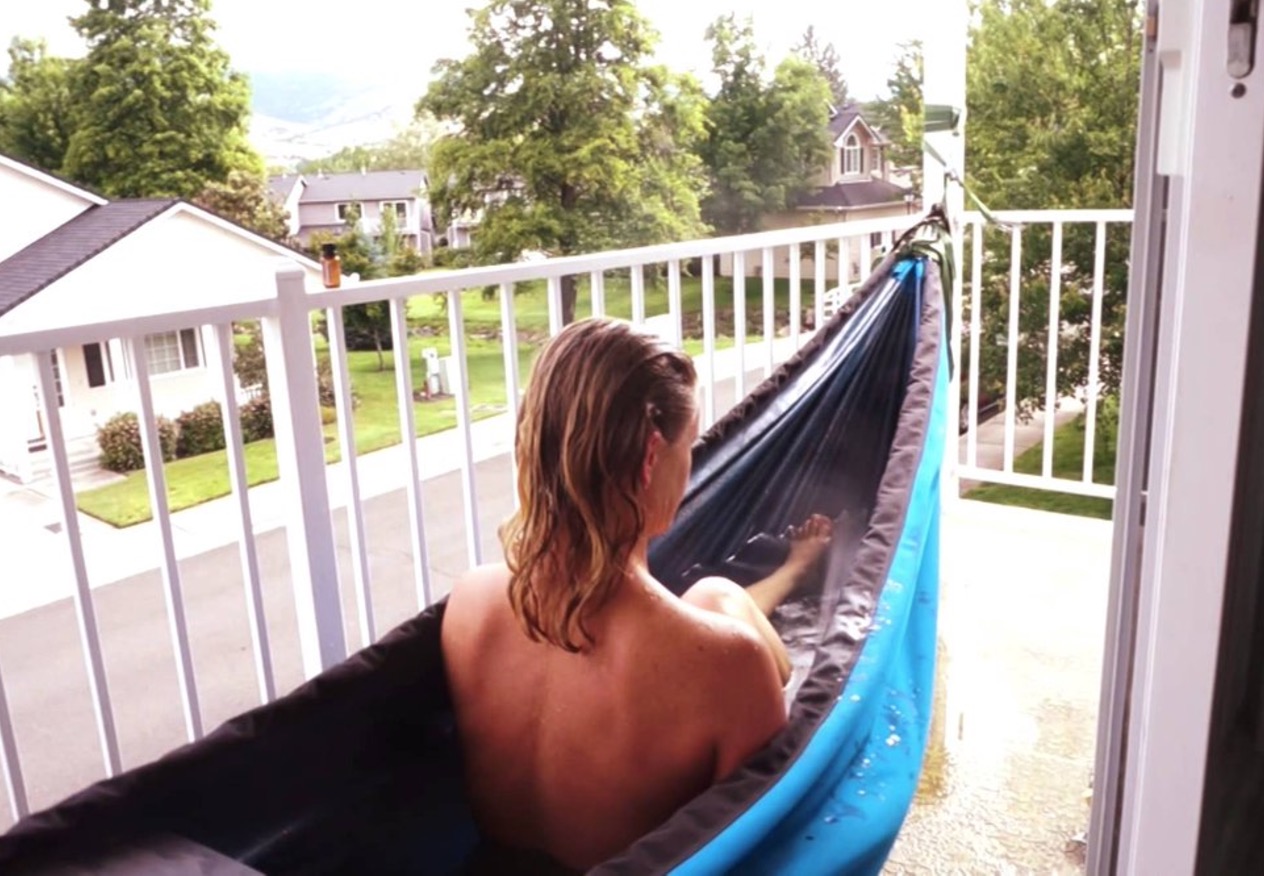 Get this straight: a hot water pod. A portable bath. The Hydro Hammock is exactly what it sounds like, a hammock built to hold water and one or two adults. A cozy watery cocoon all to yourself. It runs on a battery and comes with a propane heater, as well as two hoses that circulate the water.

Now before this thing was a reality, it was more of a dream that CEO of Hydro Hammock Benjamin H Frederick had, when he decided to bring his dream to life via Kickstarter.  Here’s the video that introduced people to the Hydro Hammock initially.

Hammocks, as we all know, are very relaxing and soothing, and so are hot tubs! But they tend to be season-specific. Winters are too cold for hammocks, while summers are too hot for hot tubs (in my opinion).

The Hydro Hammock creates a sweet harmony between the two ideas. The addition of the bubbling hot water sends you right to Heaven, and you can adjust the temperature if you prefer cooler water.

You will feel safe and incredibly relaxed in this hammock. We all know that sometimes it can be hard to feel at home while camping or at the cottage, but someone brought one to their cottage and it proved to be the perfect addition when we wanted to relax after a hard day of hiking.

This is the weirdest and coolest thing ever invented. I was unsure of it before I got in, but once I got comfortable and used to it, I decided I didn’t want to leave.

Hammocks in themselves are better for posture, as they conform to the way your body naturally falls. Same with floating in water: there is complete freedom. Who knew such freedom could come from lying in one place?

The weirdest thing about this hammock is getting into it. It’s like a canoe that is full of water. You don’t want to tip it or disturb the balance.

Get in the way you would a canoe: gently and near the centre. Once you’re in, you’re good to go. That said, you don’t have to be gentle getting in.

My one friend literally leapt in face first and this did not bother the Hydro Hammock.  Personally, I don’t like to disturb the tranquility but that’s not how everyone feels clearly.

Here’s yet another video showing where you can take the Hydro Hammock.  Namely, into the middle of the wilderness.  I’ve yet to do this, as I am not the camping sort, and prefer the comfort of my backyard.

That said, if I was a camping sort of person, I know that this would be an excellent idea.  So relaxing!

As you can see, the Hydro Hammock can be a very soothing experience, if you’re doing it solo.  Just recline and let the pulsating water soothe your muscles and calm your soul.

The hammock is made of an incredibly durable synthetic fabric and strong enough to hold 50 gallons of water and two adults. This is good news, because it’s just too good to keep all to yourself.

The heater comes separately and runs on gas, along with a 12-volt pump that circulates the water. These pieces of equipment are rather heavy and are not ideal for carrying on a hike with you, but are great for setting up at the campsite, giving you something to return to.

The heater weighs approximately 60 pounds on its own. Of course, it comes with directions, so you’ll be able to figure out any questions you may have. It is, of course, important to make sure it hangs level, so that the water doesn’t collect at one end or spill out.

Watch this “How To Use The Hydro Hammock” tutorial video YouTuber Outdoor Rush to get a better idea how to set it up!

With water and people the whole thing will weigh around 700 pounds, so be sure of the posts or trees (or whatever) you tie it to. In cold weather it takes about 40 minutes to heat, and the water gets very, very hot.

Luckily you can just hit the shut-off valve if it gets too hot, so that you don’t even have to move. This is the ultimate backyard accessory.

The View Is Yours

While we wouldn’t recommend bringing a book into the Hydro Hammock, we definitely recommend setting it up with a view. Imagine coming home after a long day at work and slipping into this secret slice of sanctuary.

Any scenery will feel like heaven while you’re all cozied up. It feels like you are at the spa, wrapped in hot towels, letting everything release. Not to mention the slight rocking motion.

We won’t pretend that we don’t notice its resemblance to the womb, which is probably why it is so comforting. It’s like being in foetal position, only safer.

Sometimes you just have to stare up at the stars and let all your troubles dissipate into the night air. Literally everyone should and will enjoy this crazy new thing.

One last cool feature is the showerhead attachment it comes with, which you can actually use as a shower. Super handy if you’re camping, and it doesn’t go through much water. Ideal for couples who hate to share the hot tub.

There’s nothing worse than enjoying a romantic evening in a hot tub at some resort and another person or couple tries to join you. Sorry, suckas, no room!

It can be a real hit if you’re throwing any winter parties and makes a great portable hot tub! Folks will be flocking to your backyard to try this thing out.

Hook it up to some posts in the backyard so you can lie back and enjoy relaxing under the sky in a warm, soothing water hammock. It will cost a pretty penny, around $1200. Hanging gear is sold separately: $260 for the single-walled, $390 for the double, and the heater is sold separately for $920.

Check to see if there are any available on the Hydro Hammock website!

2 thoughts on “Our Hydro Hammock Review – Is This Hot Tub Water Hammock Any Good?”