Giant Tumbling Timbers is like a huge, life-size game of Jenga. It comes with 56 blocks including two for the base. That’s 19 levels for this stacking game. This is a fantastic game with wooden pieces that will bring added fun to your next outdoor event. 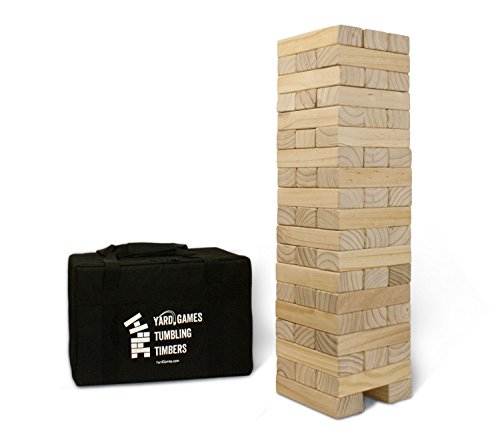 Pros of the Giant Tumbling Timbers

Cons of the Timbers

This is a fun game that comes with 56 wood timbers, which includes a sturdy carrying case. It’s essentially 56 pieces of wood you’re carrying, so you’ll need a bag that keeps them in the same place in an organized way that won’t break.

We love that it’s a natural wood that you can varnish or color the way you’d like. Imagine this in a multitude of colors or a few alternating colors that the kids like. Each child can decorate a timber with his or her name on it. There’s no end to the clever things you could do with these timbers.

Measurements of the Game

The game pieces are 7.5 x 2.5 x 1.5 inches per block. The 19 levels of the game bring the entire structure to 2 and a half feet tall. If you want everyone to have access to all the levels, you might decide to place the entire structure on a bit of cement or other flat structure. The pedestal that you use should be sturdy.

Once players start the game, they’ll pull the pieces out of the tower and place them on the top. This adds a tremendous amount of height as it’s being played. It might not need to be placed on a pedestal at all. In fact, some of the littlest players might need a boost to reach the top. It can grow to almost 5 feet tall towards the end of the game.

If you’ve never played before, we’re going to give you an overview and a few tips for game play. First, you’ll need to unpack all the pieces or blocks from the carrying bag. Start with two blocks as a base on the bottom of the tower. The next level of blocks should be placed in the opposite direction. Making the tower can take a bit of time, but it’s worth it!

Once you’ve built the tower of alternating blocks, the first player will start by gently slipping a loose block from any level. It has to be done gently and with finesse or the tower will crash to the ground.

Each person takes a turn pulling blocks from the tower. The blocks are used to build height, so they’ll be added to the top of the structure. Every block that is removed makes the tower more structurally unsound. Eventually, it’s going to fall. The person who causes it to fall loses.

The trick to pulling out blocks is to choose the ones that are wiggly and easy to loosen. As blocks are removed, the others will be simpler to remove without knocking the tower down.

You should never rush to pull a block. The person with the steadiest hands is often the one who will win this kind of game.

Normal rules say that you can only use one hand to remove the blocks. That doesn’t always have to mean you use the same hand each time if you’re getting tired.

Can extra pieces be purchased?
If you lose a block or a dog chews on it, you can buy replacement blocks. You might also want to create a monster of a tower with more blocks.

Do these easily chip?
These blocks are made of solid wood. There’s no paint or varnish to chip on the wood. It’s possible if you add paint that the tower falling could make the paint scrape or chip a bit.

Will they function properly if wet?
It’s best to remove these from the yard if it rains. They can take a bit of water, but they are not varnished or protected from the elements. If you play during bad weather or after rain or snow, place a protective cover on the ground or pedestal before placing the first layer of blocks.

The Giant Tumbling Timbers from Yard Games is a fantastic game that can be played by anyone at your next party or event. Even the people who aren’t participating will really get into watching and pointing out wobbly pieces to remove.